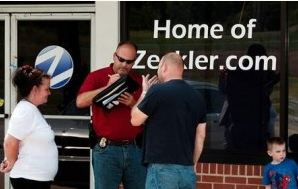 On Friday Zeek Rewards was shut down by the SEC due to a very serious and shameful claim that the company was a $600 million Ponzi scheme.  Here is the CNN article.  This has left Zeek Reps stunned and saddened.  Many of them have lost a lot of money that they had invested in the opportunity.  Many reps and leaders from other companies abandoned their opportunities to become a part of Zeek are left feeling embarrassed and confused.  And to make things worse, several other network marketers are preying on these hurt representatives like vultures picking on a dead carcass.  Talk about kicking people while they’re down.

Why I wouldn’t try to recruit Zeek Rewards Reps?

It’s because I’ve been there.  Like those Zeek Reward Reps, I’ve been a part of a company when it shut down. Well, actually, I was kicked out of the company before it shut down because I kind of predicted that it would and that something wasn’t right.  I shared with a few people on my team and because I was at the top of the comp plan and a leader,  I was kicked out of the company before it closed down, but when it did, I felt extremely hurt and sad.  So, I know exactly how all of those Zeeklers are feeling right now and it’s not good.

It’s hurtful when you believe in something so much that you would put your hard earned money into the company only to turn around to have it tumble and crash on you.  And unlike Zeek Rewards, my old company Warm Spirit, was not shut down by the SEC, it was shut down due to a dispute between the founders of the company and that was even more disappointing because it wasn’t as if it was something that could not be fixed.  It was just a founder that didn’t want to take the time to try to fix it.

What has happened with Zeek Rewards is like getting a punch in the gut, especially when the Federal government comes in and calls the company a Ponzi Scheme and then make claims that the owner is siphoning funds.  And that’s why I believe that people should leave Zeek Reps alone.  Give them time to heal.  Many of these people will never do another MLM.  Some of them will quickly jump back on the bandwagon of their original primary company (as I heard many people did the company on an underground basis because they didn’t want anyone to know they were involved).  Whatever the case, I say let them do what they need to do to land back on their feet and don’t try to recruit them.

What Zeek Reps Should Do Now?

Now is a time to get quiet and reflect.  Think about what you did that you would do differently.  Think about what it is that you really want to gain from the industry and maybe what the ideal network marketing company for you looks like.  What are their qualities?  Then when and only when you feel ready to jump back in the game, do it with people you feel comfortable with and with a company that offers a product or service that you use and feel comfortable standing by.  This is key.  And understand that most network marketing leaders that are successful  because they have planted their flag with one company and stuck with it.  Think about the greats leaders of the industry.  They’ve joined one company and stuck with it for years.  This should be your ultimate goal.

Best wishes to all of you that have been devastated by the Zeek Rewards news.  You have my sincere heartfelt thoughts and prayers.  Know that during this time of healing that you can have success in this industry even after such a hard blow.  And remember that time heals all pain.